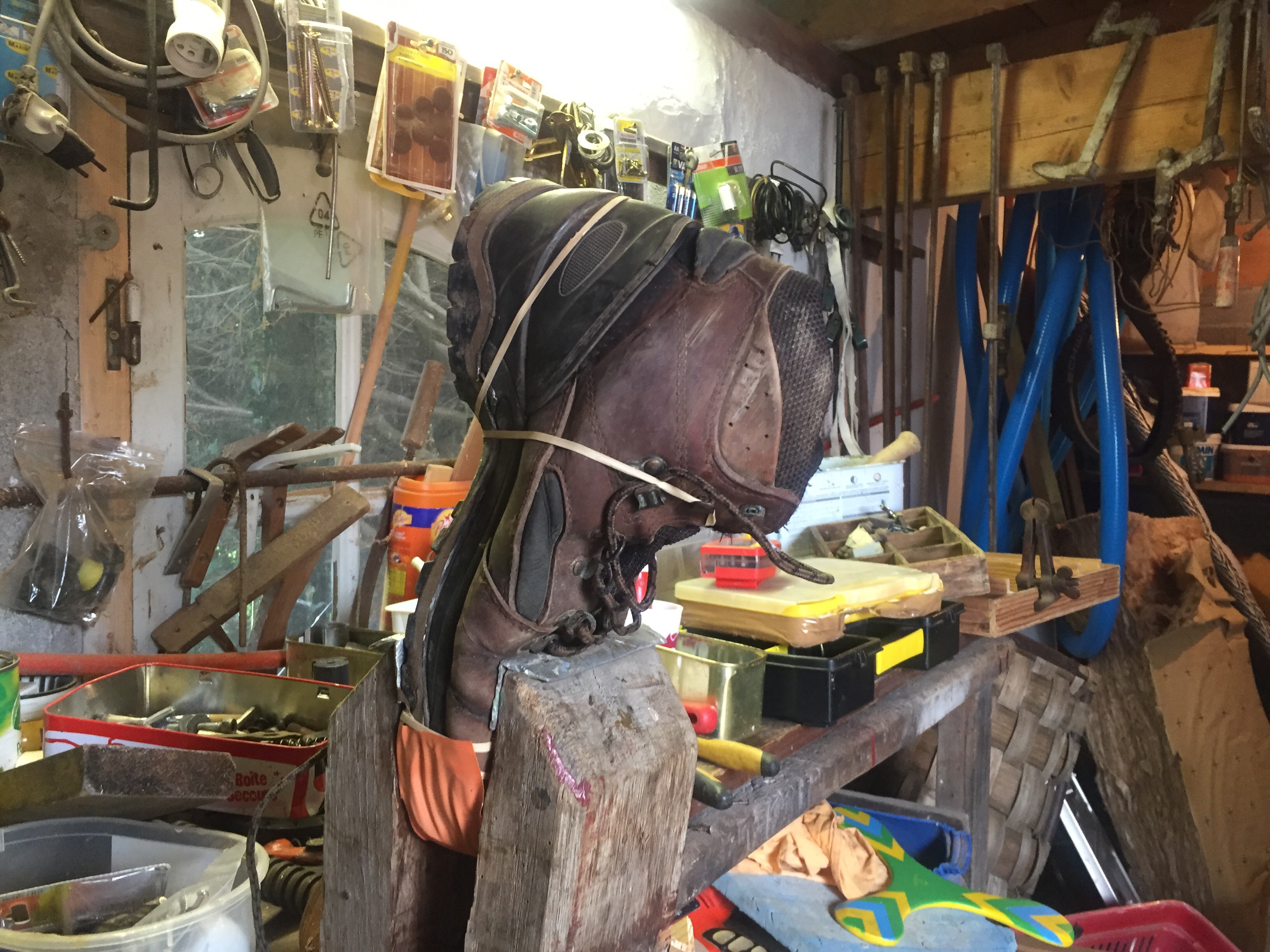 I am so tired. Many parts of me hurt. The stars are out. Lightning in the next valley is silhouetting the ominous mountains surrounding my new home.

This morning I woke to Ed Harrís from the Truman Show open shirted making me four breakfasts. Over fruit bowls, chocolate-cinnamon porridge and toast with spreads we talked of our lives. I had intended to leave at seven but it was dark, wise Harrís explained this is because time and light work differently here – France. Half way through breakfast three he dropped in that he had lived in New York for seven years. Discussing NYC in the 80s went on for far too long so I left at eight. At least the sun had come up.

In the restaurant the night before a waiter related to the owner in some way explained that the GR10 route actually starts in his restaurant! It seemed strange that such a route would start in a place with murals depicting tacky visions of Ancient Greece. But a little tipsy I did the first kilometre of the GR10 staggering along the harbour of Hendaye.

Skipping last nights jaunt this morning meant I could head straight for the mountains. Glimpsing them between faux medieval high rise flats they looked just as intimidating as yesterday. But I was full of excitement, I was heading into the wild! It wasn’t long before I found myself in rolling hills, farms either side and far off mountains peaking through clouds. Ed told me my walk today should only take six hours and my guide book confirmed his wise words. So why would I doubt anything Ed has told me? 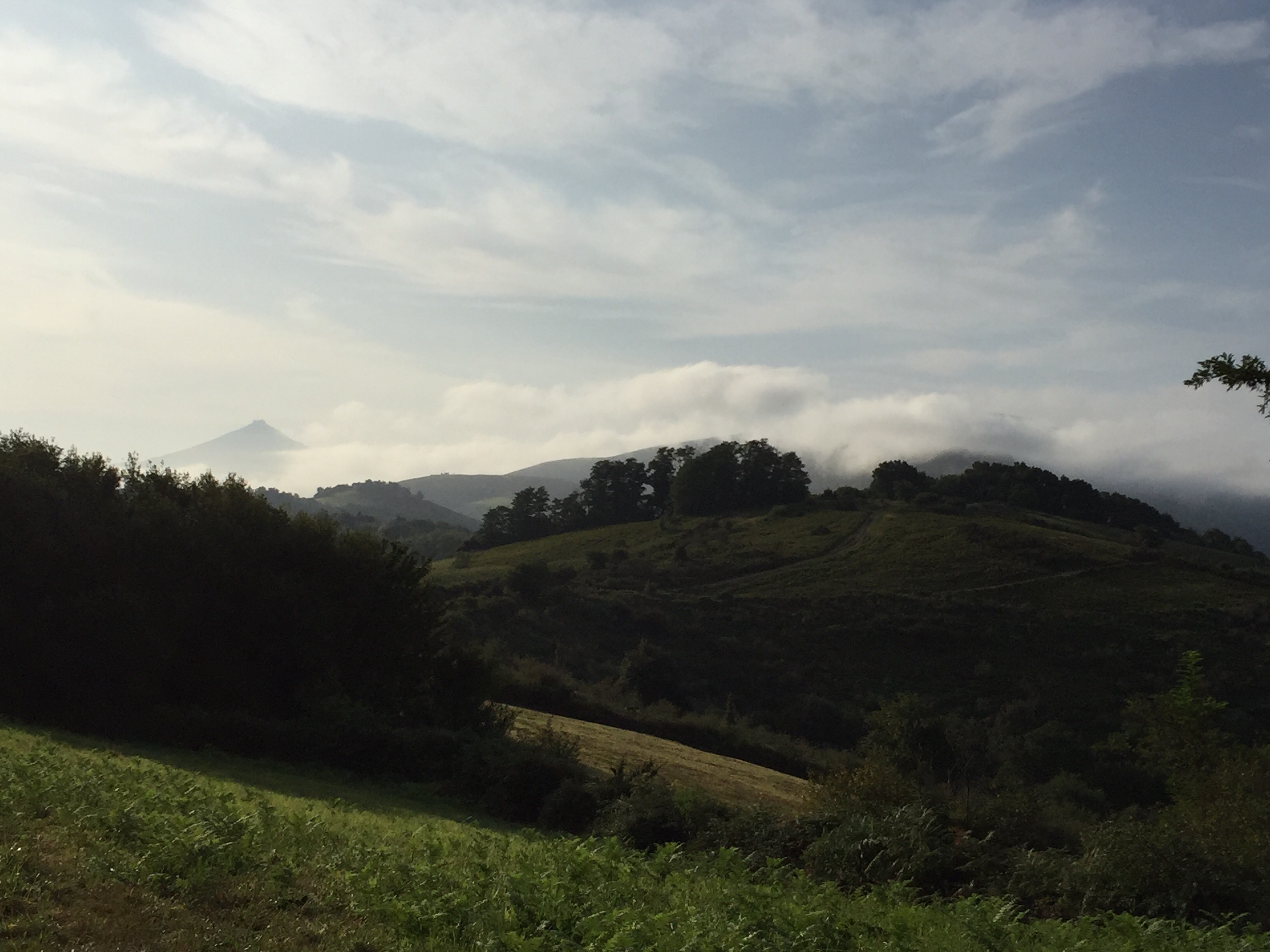 I turned into what must have been my second field and looked up the lane. Then walking towards me was a man with a dog. He’s wearing camouflage, odd! What’s that in his hand? Oh look! A fucking rifle! A mixture of thoughts went through my mind as the man side stepped into another field and shot what I presume was a bird. I couldn’t decide what was more annoying, this guy shooting stuff, or the image of Heathers smug face reading about it.

Anyway we politely waved at each other as he searched for a carcass and I decided to have a wee. As I exited my chosen wee spot I bumped into a lovely Australian couple. If I had to guess I’d say they were in their 60s. Their names were Murray and Ange. We exchanged pleasantries and it turned out we were doing the same route! At this point I was already sweating and smelling a lot. So we had a good laugh about that and I slimed my way up the next hill ahead of them.

Cue montage of Jeff merrily following his route, stumbling across farms, waving at farmers maybe even slipping in the occasional ‘Bonjour!’. Then hilariously slipping on his own sweat. The music could be something bubbly by Bridget Bardot with the occasional COCKADOODLEDO from the farms. Ya know, to emphasise this is the rural provincial bit before shit gets real beary. The clip ends with Jeff reaching to undo his flies in a lay-by.

Me: “Oh hey Murray and Ange! I knew I’d see you again soon.”

Murray: “Don’t be embarrassed Jeff we all need to piss.”

Life continued as such for quite some time. Heading higher and deeper into the Pyrenees. These are just the foot hills really before the big ol mountains in days to come. This did not detract from their beauty and for me they were still tough work. Each new hill I climbed either alone or with my Australian urine friends was surrounded by gorgeous mountainous views. As we skirted the edge of Spain ascending a 600m hill we formed new friendships. Their names were Jean-Pierre and Jóel from Brittany.

It was on this mountain that I started to feel ‘well shit’. The morning clouds had dispersed making way for a sweltering midday sun. The weight of the rucksack taking its toll. Every other breath started to fill with obscenities, cursing my life choices. The scenery around me was breathtaking and occasionally sparkled as I blew the sweat out of my moustache. Then. My left boot fell apart.

On that baking mountain crescent I unpacked my replacement walking sandals (thanks Jonny for the tip) and chucked my boots into my rucksack. This added a crippling weight to my climb. Non fun. 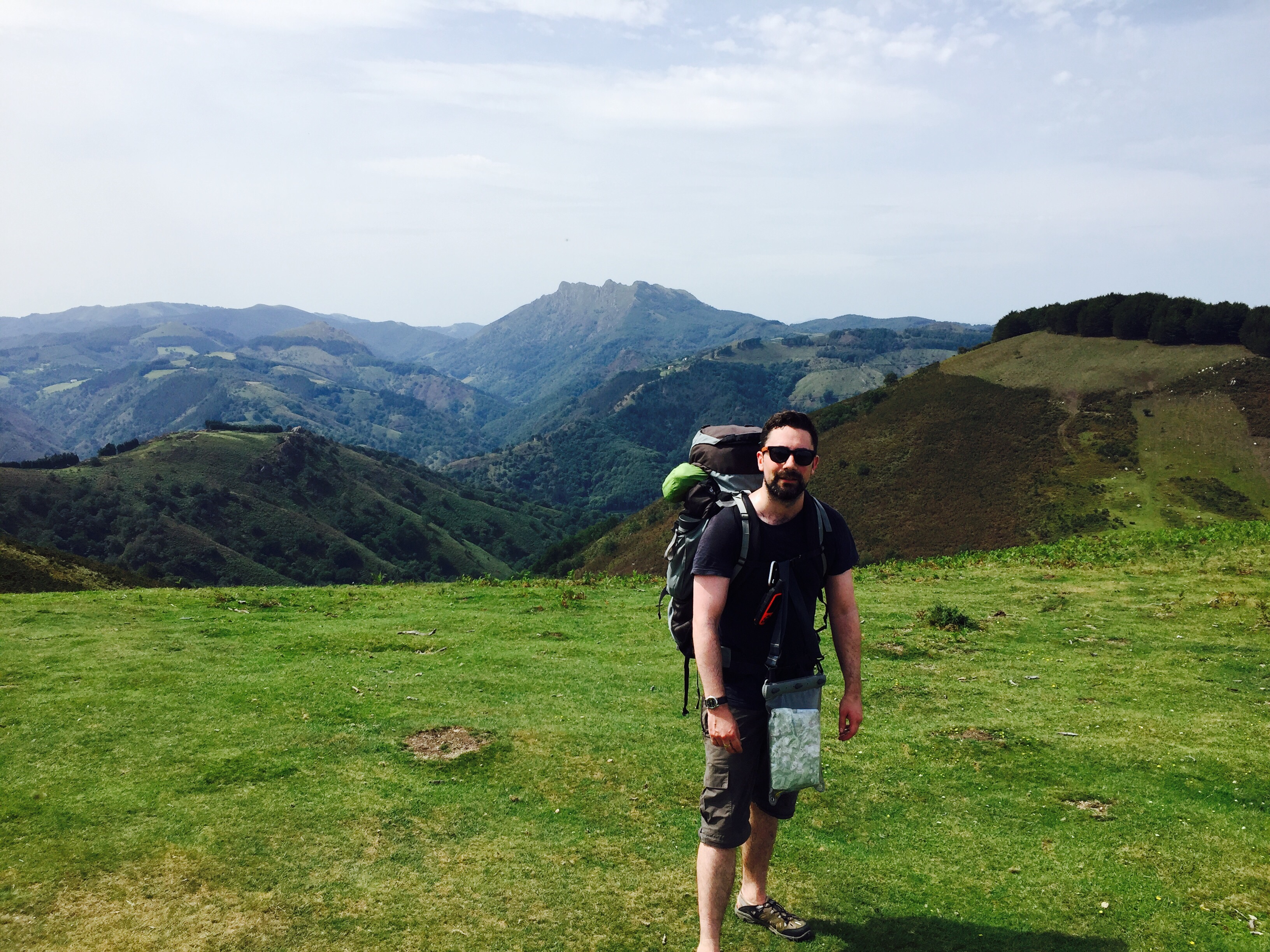 Murray and Ange left my side at Venta Elisalde which is a restaurant in a fake town high up in the mountains. It was quite a surprise to come across. I made a number of friends in the restaurant including a group of teenagers. At one point one of them said ‘enchenté’, this is one of the few French words I do know. I leaned in towards him and shook his hand with a sweaty grip “enchente” I replied. I think he thought I was a little too pleased to meet him. Our waitress lent me some duct tape to fix my boots. I thought I wasn’t far from my destination, (a gite in Olhette) I was wrong. Many forests, rivers and mountains later Jóel and Pierre re-entered my life at just the right moment.

This is so annoying but I’m going to have to summarise from here as there’s too much to write about and I am exhausted. Jóel and Pierre have become good walking companions. Teaching me French as we walk. Now my boots are in a vice in the gite owners shed. He also lent me some of his speedos for the swimming pool and took great pleasure in showing me the pamplemouse (grapefruit) he is growing. I’ve been cooked an incredible meal and shared it with no less than 8 French people. Everyone seems embarrassed that they can’t speak much English which is hilarious because there’s three languages I could try and use here – French, Spanish and Basque and guess what, I know none of them! What a chump. The walk was incredible but it was 15 miles and took 9 hours. 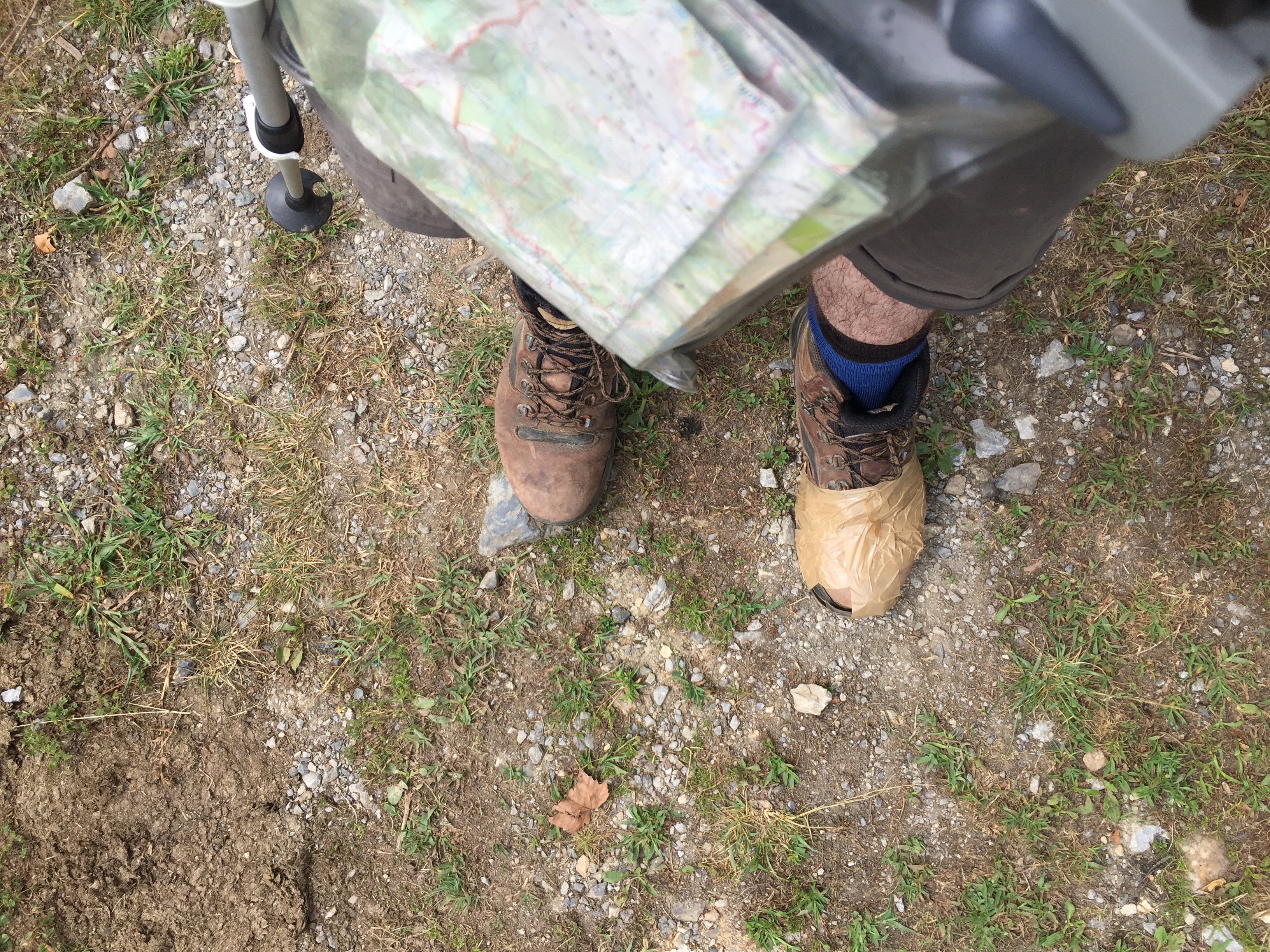 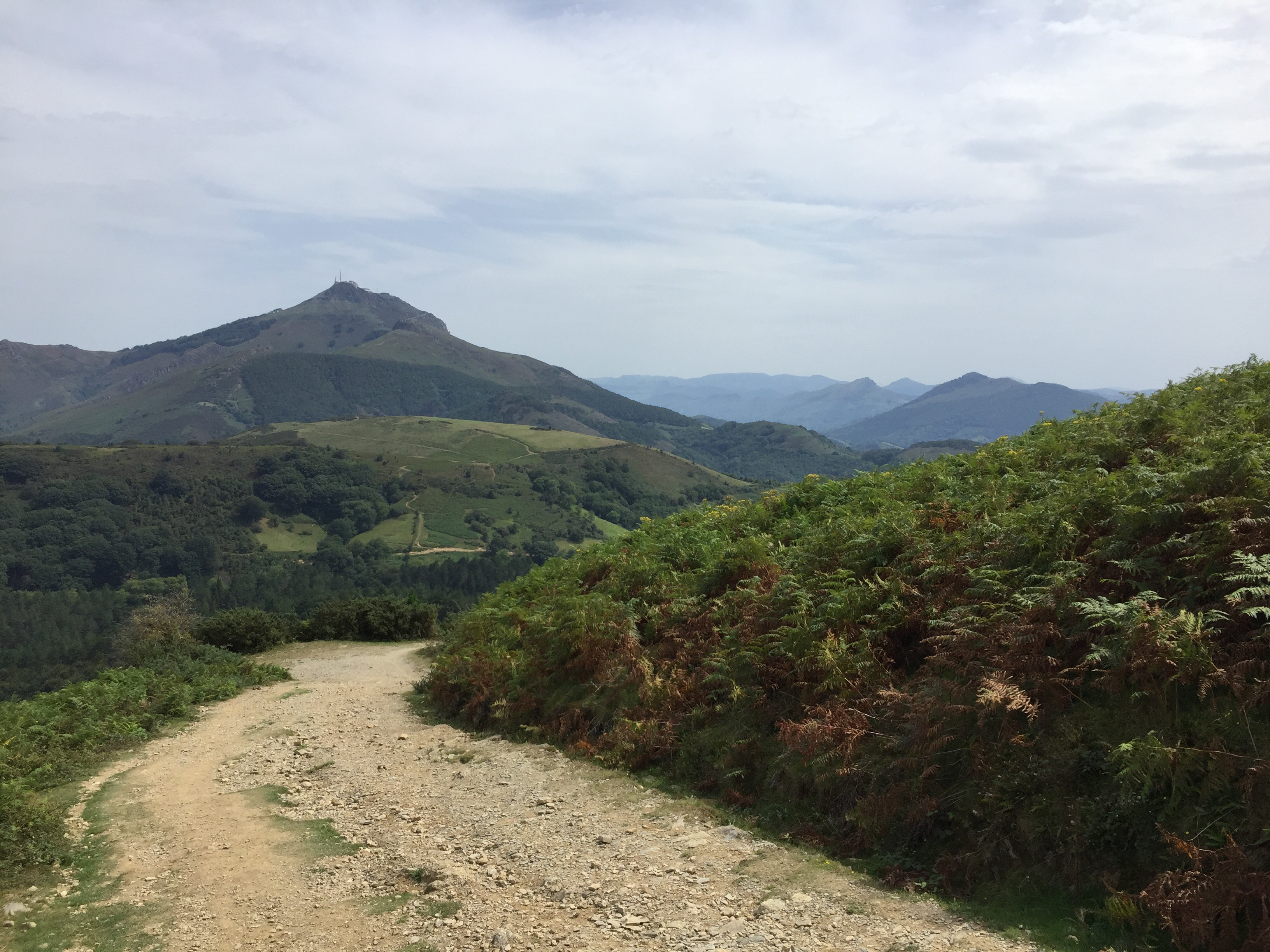 This pic goes out to the Miles family.