Spoke to a girl, walked up a mountain

There’s an old Welsh saying ‘if you spend the night on top of a mountain you’ll either come back a mad man, a poet or married’ something like that anyway. Well. I got married!

Just another hilarious Jeff joke there. I’m not even engaged – there were only goats up at the top and we all wanted different things. Plus not one of them was into art, in any serious way anyway.

Only joking I didn’t even sleep at the top! How’s this post going for you? It’s already annoying me so I’ll start again at the beginning… Last night.

I discovered there are actually three pubs in Beddgelert which literally added a third dimension to my night. In one of these drunken dimensions (the last one) there was a golden haired barmaid with twinkling eyes. I propped myself up on a locals chair at the bar and over a period of half an hour thought about talking to her. When I did it came out like a loud bleat rushing words out: “ARE YOU FROM HERE!?”. Surprisingly, given this terrible start it went very well from there. We chattered away the evening like two of the four old boys from hit 90s TV show ‘last of the summer wine’. Only we were much younger and one of us was a woman.

My eyes went gooey gaga as slowly she revealed herself as a really nice, lovely person. At one point she asked where I’d walked from. I told her from Penrhyndeudraeth. I love saying that word but when I do I say it very slowly and still get it horribly wrong. However when she said it, it sounded like 2 syllables and it seemed as though she’d just cast some magical spell. Before she left she told me her name. I won’t put it on here but it’s the kind of name that you’d usually only associate with fairies or a Tolkien princess. Magical.

Cut to next morning.

“I ALWAYS WANTED TO BE A COMMANDO” said the Beddgelert campsite assistant. I’d only asked him if I could charge my phone in the cabin. One life story later and he let me. He was a lovely guy though, it was probably my hangover that made me a bit bitter. If he had seen me an hour earlier he would have been more sensitive. 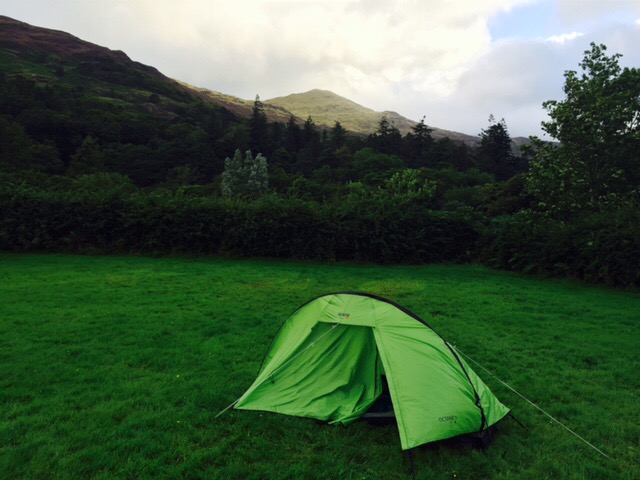 I’ve decided to nickname my tent ‘the chrysalis’ because that’s exactly what it’s like. It only just fits me and its transforming me everytime I get into it. For example after a night which really should not have been drunken, this morning I emerged like a beautiful butterfly. Much to the shock of more nearby families, I huffed, grunted and coughed loudly as I excreted myself slowly from the smelly wet green chrysalis. Slipping out onto the wet grass, I was not in a good way.

A shower and ibuprofen later I was reborn, refreshed and ready to go! Seriously, I felt great and the sun was out! For some time I deliberated over which route I should take up Snowdon. I had two options:

1. Go all the way to the top and camp somewhere. I’ve never done this and never with a full rucksack.

2. Play it safe, head half way up to the hostel, ask how safe it would be tonight to camp out and decide what to do from there.

I very nearly went for option 1 but I thank my lucky stars I went for 2 in the end. 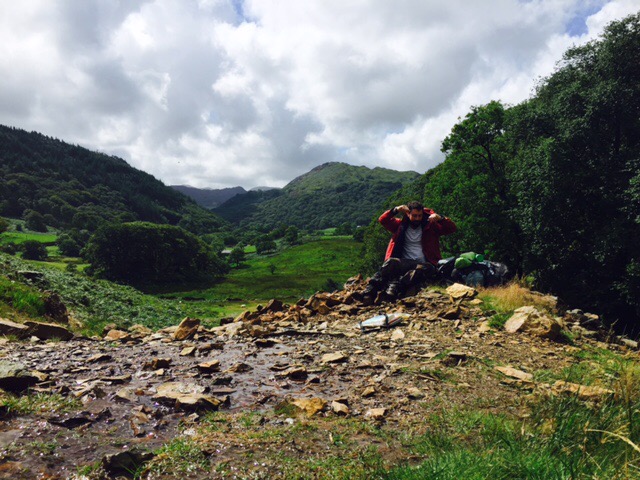 Most of the walk was as usual filled with beautiful lakes, luscious green forests and amazing mountain views. Again I barely saw a soul. Then came the ascent. I’ve done this bit before, with Paul last year. I knew it was partially boggy and difficult but I also thought I knew the way. I was wrong. I missed a stupid crossing over a river which would have gotten me away from the bog less than half way up. By the time I realised it was way too late. I was forced to continue all the way up in deep, sticky, smelly bog. Walking up that way is hard but in bog its ridiculous and by the time Pen-y-pass hostel was in view I felt terrible. Everything ached I really didn’t think I’d have the energy to get there. Kind of ridiculous when you think that 4 hours before I almost decided to go to the top! Slumped against a rock at one point I breathed out and it felt like life was slipping away, everything was going dark. Then I remembered that I had that hilarious goat joke I wanted to put in the blog. So I swore on Maggellan the Magnificent’s mango coloured Mohawk that I’d make it there alive. I hauled myself up slowly. Groaning with every slippery step.

Once in the hostel I asked the receptionist if he thought it was wise to camp out on the mountain tonight. He said better not as the winds will be about 66mph! I could have kissed him. ‘That’s the perfect excuse to put on my blog’ I thought as a slow smug grin grew beneath my beard. Baffling the receptionist. I was saved. I would have a bed tonight.

The blog is definitely a driving force. So much so that everything I now do, I think about in blog format. For example I had a cup of tea earlier and this is what went through my head “day 4, 16:36, as the hot brown magic slithered down my throat it soothed all the deep sores of my soul”. This is what I actually thought, in that tense… Which begs the question – am I writing the blog? Or is the blog writing me? Who is ‘me’? And why didn’t he get a proper haircut before he came up here? Then for a fleeting second I contemplated a Mohawk and punched myself in the face. ‘I’ was back. 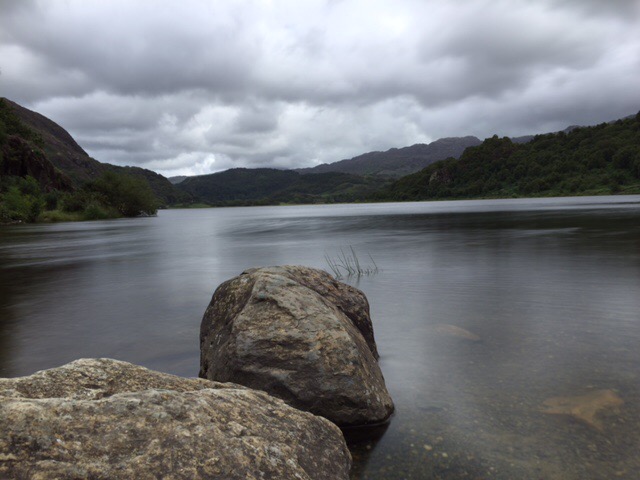 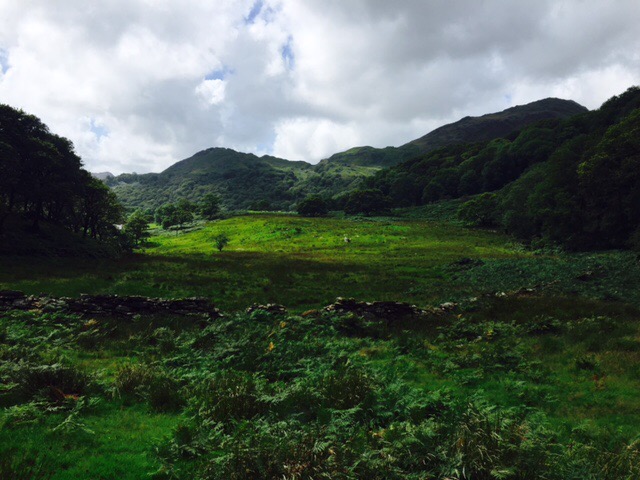 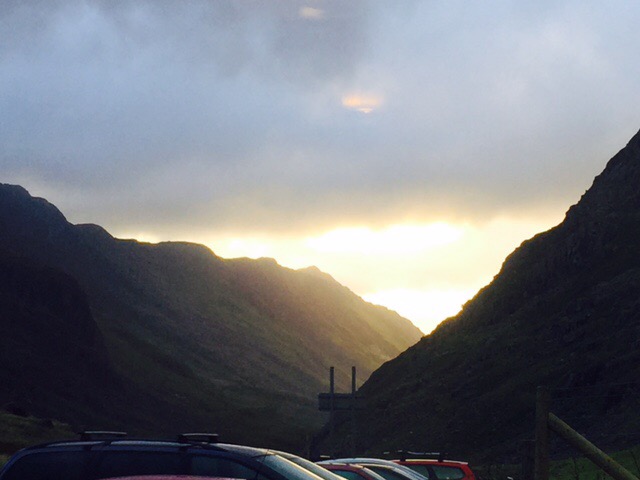 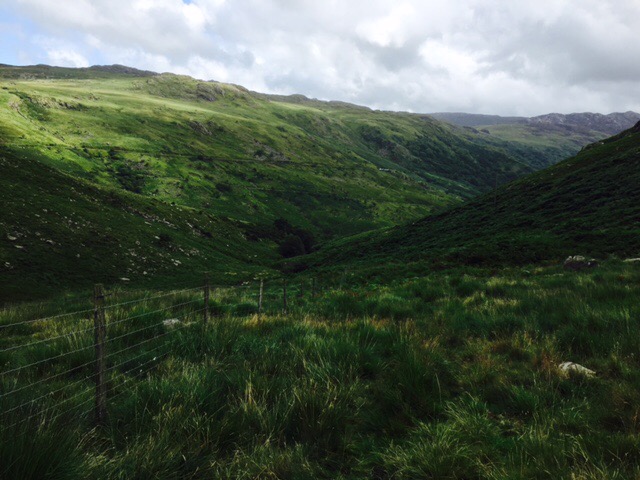 7 thoughts on “Spoke to a girl, walked up a mountain”