I am so tired. So, so, so very tired. Not sure exactly how far I’ve walked. I think I’ve walked for 10 straight hours though. The sun is setting pretty spectacularly on the opposite side of conwy valley. It’s also setting behind the mountain range I’ve just conquered in one day! I am sat comfortably(ish) in my chrysalis (tent for those just joining us).

I’ve honestly barely got enough energy to write this post but here goes! First, to try and put things into perspective I’d like to show you a photo I took at the top of Snowdon yesterday.

Can you see on the far left of the picture, there is an estuary cutting into the land? That’s where the sea meets the North Wales coast. Well I’m not walking to that bit, I’m walking to a bit of coast way off in the distance just below that blanket of cloud. I know right! Crazy! I’ll just give you a moment to pick your morning porridge out of the screen you’ve sprayed it all over…

There we go. That’s better. Nice top by the way, where’d you get it?

Now not to labour the point or anything but to get to that way off point in the distance – I actually walked around a mountain range and further inland! To Betws which isn’t visible in this picture but would be way off to the right, and today was the day I had to walk over the mountains, out of snowdonia and back towards the coast.

Betws-y-coed is undoubtedly beautiful. Mainly because it doesn’t matter what direction you look in all you will see is large looming mountains completely covered in thick green forest. Betws is the epitome of the villages I described yesterday. There’s a strong beautiful river cutting its way under a canopy of evergreens and oak. This morning after a topless* FaceTime conversation with my gran. I headed up early on a bus to finish the walk from yesterday and follow that river down into the village. Best. Morning. Ever!

The weather did this for most of the day; Rain, rain, rain, sun, rain, rain, sun! But I loved every second of it. Having the sun slip in and light up my wet world every half an hour made my walk all the more magical. Sometimes it would only appear for a few minutes, casting a stream of light through misty branches. Often I was too slow and couldn’t photograph it. Stomping, swinging and singing my way back down to the village like a little child. Occasionally flinging out my arms, raising my face to the sky for a spattering of mountain rain and shouting “BLESS YOUR PONY TAILS RHIANNON GOD OF RAIN”! You know. Just for fun.

I packed up my tent and headed up into the mountains towards a special lake I know called Llyn y parc. It was a steep climb but my god was it worth it. Being in those forests was fantastic. I couldn’t believe the size of some of those trees. Then the lake, oh the lake! This was the one. This was the lake I’d been searching for. This is the lake that got rather irritated with me earlier. It wasn’t irritated now. So, so peaceful. So beautiful. I’d made it.

Sat on the shingle of a little lake shore. I unpacked some plastic cheese and hastily made a cheese sandwich before the next batch of rain. Chewing away just staring at it all. I little bit of cheese fell out of my mouth, bounced off a particularly ginger part of my beard and fell into the lake. This post is bloody thrilling isn’t it!?!

What was that? Moving in the water over there? Is there something coming out of the lake? I started to imagine a beautiful ‘well fit’ woman steadily rising out of the lake. I must have woken her because she was only wearing a nightie which was completely wet through! It was like 11am though and bloody Friday! Anyway she stepped slowly towards me. Leaned over and whispered in my ear in the softest most attractive voice I’ve ever heard “be more careful with your litter in future”. With that the lake lady was gone.

Is this blog starting to worry anyone? Just me? Anyway obviously some of that didn’t happen. I actually got a little emotional (good emotional) sat on that lake and may even have topped the lake up a bit. I didn’t expect it to but it happened, hey ho don’t judge!
From there I just followed the mountains. My rucksack was stupidly heavy, my feet hurt in every way imaginable. But when you’ve got mountains and forests like this none of that matters.

Eventually I made it to ‘Surf Snowdonia’. I wasn’t able to partake because they’d only just got it up and running again. It’s pretty bloody cool though and it was great watching the lifeguards practice. After a day in the mountains I chatted with fun wide eyed surfers who seemed impressed at my challenge. I felt like the best guy in the place. One of them actually high fived me (no one told me high fiveys are back!?!). To them I was like the top dog in the hit 90s cat and dog adventure movie ‘homeward bound’. I was a wild animal with a single purpose – to make it home. Then one of the surfers wriggled out of the top half of his wet suit. The pecks and packs on that guy, phwoar, they were all in the right place! I was no longer top dog, I felt fat.

To get to my campsite I had to follow the estuary back inland and over a bridge. This allowed me a view of just some of the mountains I’ve traversed today. I couldn’t believe it! From there as far as I could tell I could either walk along a busy, bendy dangerous road or follow the estuary north through fields. Clambering into a field I was confronted with about ten children. One child was rummaging in the boot of a car and shouted “HEY DAD I DIDNT KNOW YOU BROUGHT THE GUN!”. The dad appeared and asked me why I was there. I told him where I was trying to get to. It turned out he was the farmer. Really nice guy. He offered for me to sleep in a field with his cattle but said it would be next to impossible for me to find a way on foot to that campsite. When I refused death by bull trampling he insisted he drive me the remaining two miles to camp. I was so very grateful, farmers are the best!

Tomorrow I was supposed to have a day of rest and surfing. Not anymore, I’ve decided that despite how my feet look, smell and feel I’m going to walk all the way home. 15 miles. Wish me luck! 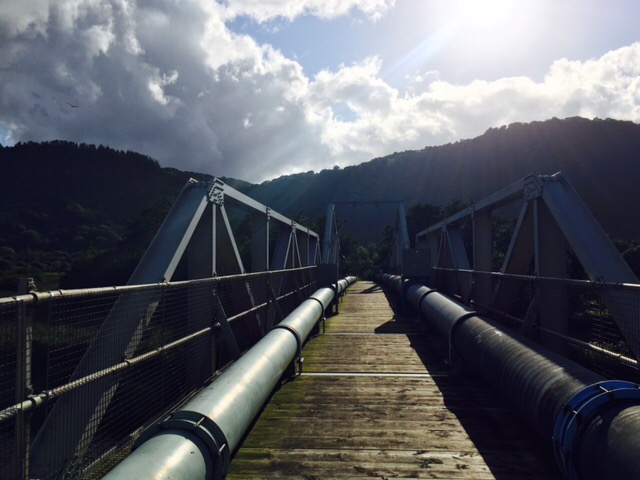 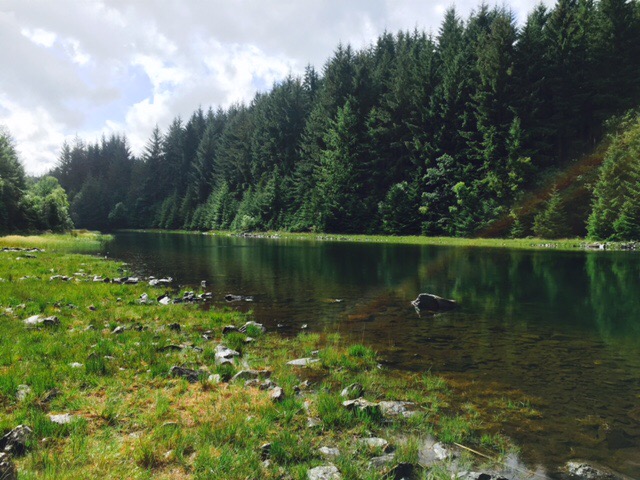 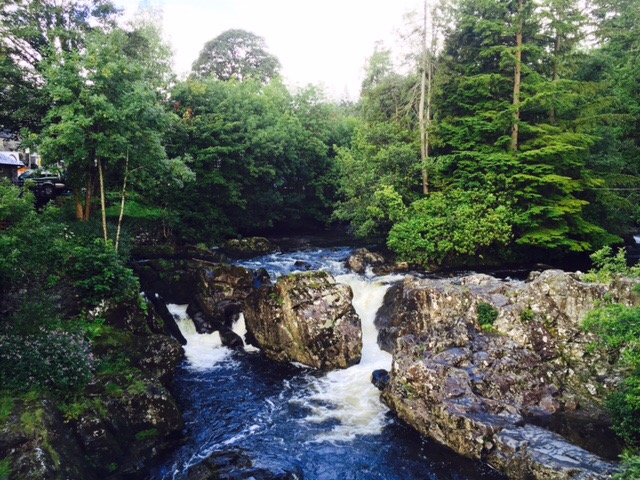 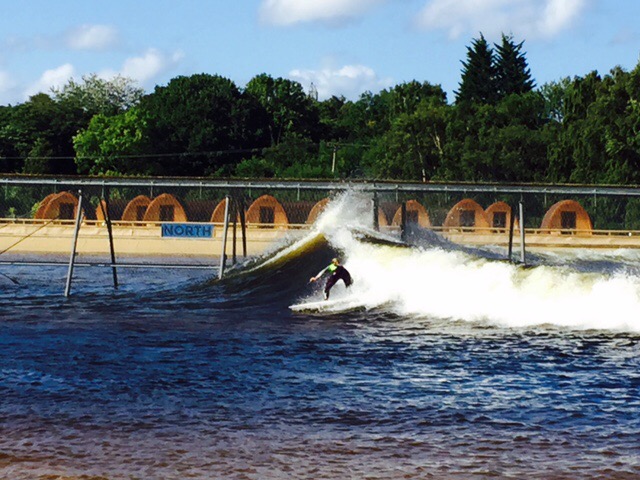 *I was topless and she accidentally phoned me!