Dad and I woke in our dark hotel room to the smell of man, curry and wet socks. Over breakfast we exchanged a look only a father son bond could provoke and I knew the time had come. Today I was to become a man. Peaking out from under my fathers protective wing I tentatively stepped out to make my way in the world. I can’t blame Dad for not joining me today. His feet were a mess!

I waved goodbye as dad waited for the next bus to Porthmadog. I would see him once more there before we said our proper goodbyes (he had to give me my big rucksack for the next 6 days camping). The air was fresh and the sun was peaking out. I headed for the Coast. Once on the hills overlooking long shining beaches I was completely alone. I didn’t see anyone for at least 3 miles until in the other direction an older man hobbled towards me. It was a brief conversation which opened with him saying “have you seen my wife!?” And me explaining I hadn’t seen anyone. He hobbled off before I could ask how long he’d been looking, hours? Days!? Years maybe!?

The temporary smaller bag I’ve been using for the past 2 days is to put it politely – awful. I was in a lot of pain by the time I made it to the sunny beach. I’d also forgotten sun cream. So the state in which I dragged myself onto the sand was quite a surprise for the happy sun bathing families. As children innocently built sand castles, poked jelly fish and splashed each other with sea water. I grunted along clutching and clawing the bag in front of me with my arms, wearing a large black cagoul blowing in the wind like a cape. Glancing out from under my hood I occasionally saw protective fathers slowly edging their sons and daughters behind them. Heart warming really. I must have looked like a poorly disguised golum crawling out to sea from the mountains.

Half way across this very long beach I de-caped to take some photos. The beach breathed a communal sigh of relief once my pasty human skin was exposed. There were loads of jelly fish beaching themselves. They looked like weird alien brains. The huge mountains inland from Cardigan bay were enshrined in gigantic dark fluffy clouds. Slipping off into the ocean to the west was the occasional shimmer from shell suit island. 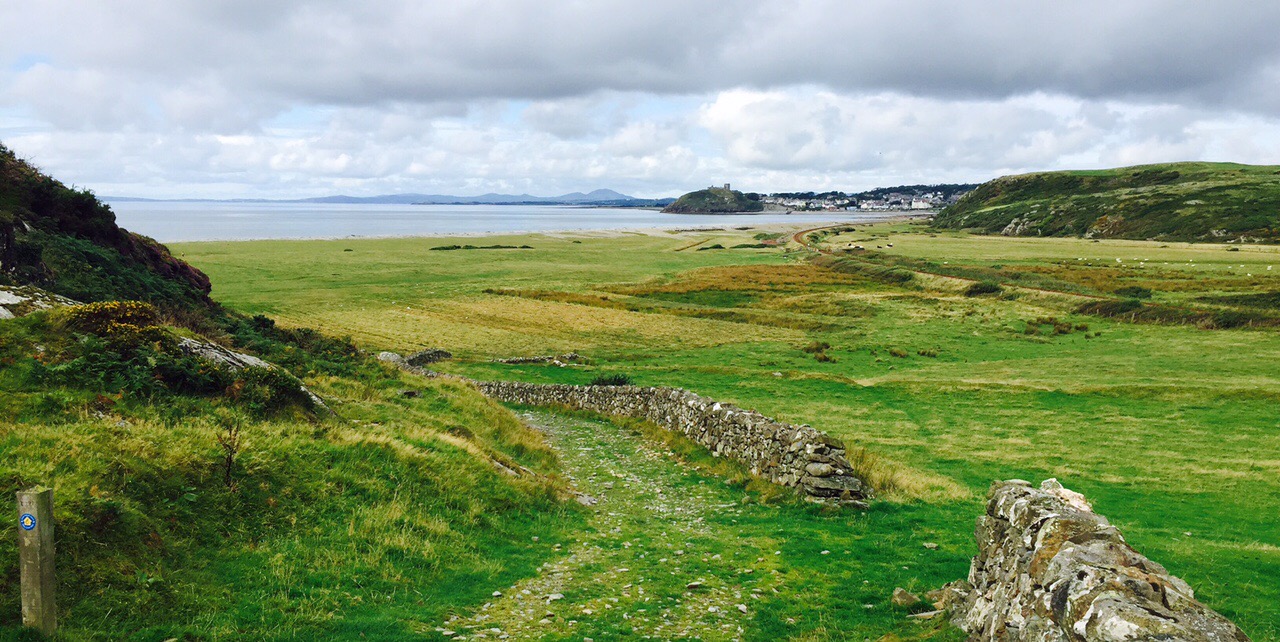 Just outside Porthmadog I met dad again. He really is a great dad. He had bought me a waterproof lining for my larger rucksack and a pork pie for lunch. Which was delicious, thanks dad! We had a final emotional goodbye. I’ve loved walking Llyn with him talking about life the universe and reggae!

As I stepped off the road at our exchange point I recalled a conversation we’d had from the night before. “I’ve absolute confidence in your ability to be organised and survive in the mountains Jeff.” He said. “Really dad?” I replied bashfully. “No but I thought it’d make you feel better”.

Since then I’ve traversed the coastal path through Porthmadog and even had a saunter around Portmerion. In Porthmadog I stormed through the hoards of tourists to a book shop. Picked up another Bill Bryson as my last one was destroyed in the deluge yesterday.

Portmerion is strange. The setting is beautiful and I’m kind of sad I’m missing the festival there. Maybe it was because I was on my new path to lonely mountain roaming. But I did struggle to get my head around the place. For those that don’t know, Portmerion is a privately owned estate modelled in the style of an Italian seaside village. I mean I actually think the architecture of the place is really lovely and well thought out. But it’s painted all these crazy colours and you have to pay to get in which made it seem like a theme park. I was exhausted by the time I got there but stumbling around the faux Italian village squares and impressive fountain sculptures. I was half expecting the mad hatter or mickey mouse to step out and ask if I wanted a selfie.

Anyway many forests, hills and chats with kindly farmers later (over their flocks of sheep) I’m safely on my campsite. Incredibly happy to be off my feet. No sooner had I sprawled myself on a plot than a helpful wily old neighbour to my left offered me a cup of tea. He also gave me a bunch of great tips for setting up tents, which were much appreciated. Lovely guy, no teeth. My neighbour on the right side looks like Father Christmas on very hard times. In the gap in his face which isn’t covered with white hair, dark tales wait to be teethed out. I want left neighbour to stop showering me with tent wisdom and give right bad Santa neighbour a chance to tell his story. He hasn’t said a word to me but occasionally we’ve exchanged suspicious glances.

I headed into Penrhyndeudraeth and found a chip shop and a chip shop friend. A lovely lady who opened conversation in Welsh automatically provoking an apology from me. We chatted for quite some time about the festival, where best to walk and how long the blooming chips were taking! She seemed to know everybody who walked down the high street. I got the impression I could get whatever I wanted in this town just by knowing her. But I only wanted chips so off I went. “See you in London” she shouted after me.

Back on camp the owner came over to collect her money I was half way through paying when I heard a billowing German voice say. “Women… Allllwaaays after money”. It was bad santa neighbour, he smiled and winked at me. Despite one having questionable views on women – I think I have two new dads! (Not as good as the real one though).

The suns going down. I’m knackered and I’m running low on battery. Surrounding this valley are humongous mountains and thick forests. The mountain directly East is so dark and ominous it’s scaring me just looking at it. Tomorrow is the day I head up into proper Snowdonia. Until now I’ve been flailing around in the shallow end convincing myself I’m doing ok.

Oh I also got a nice message from Paul today… 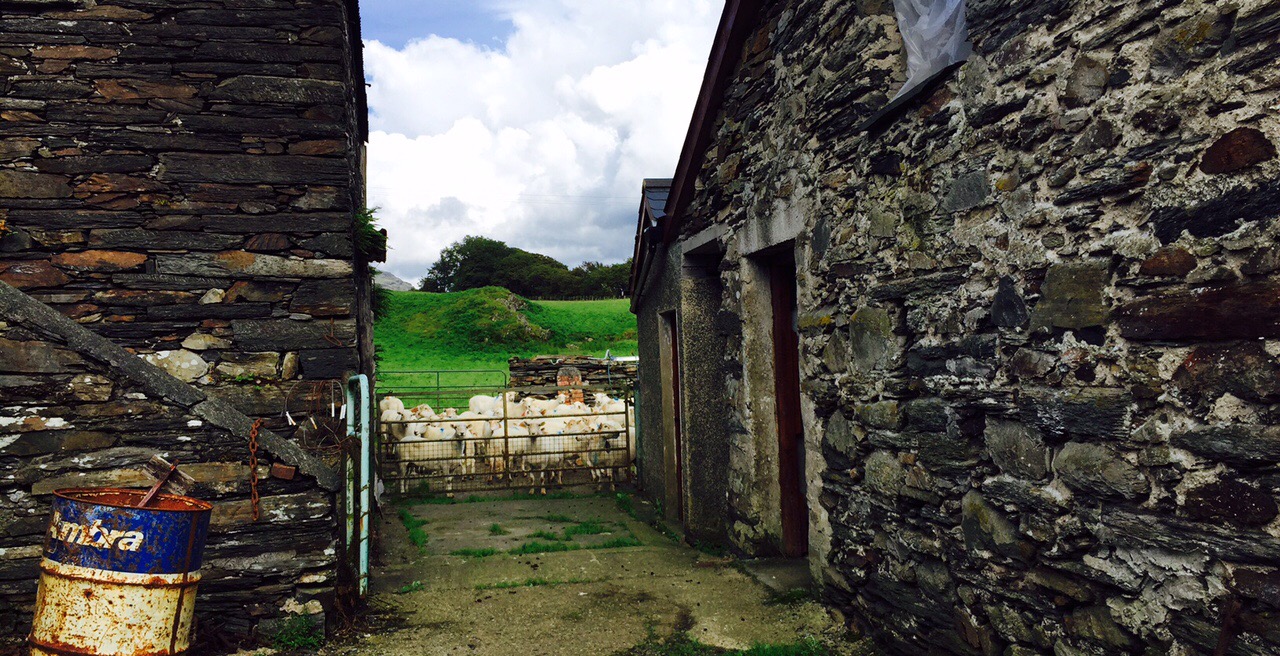