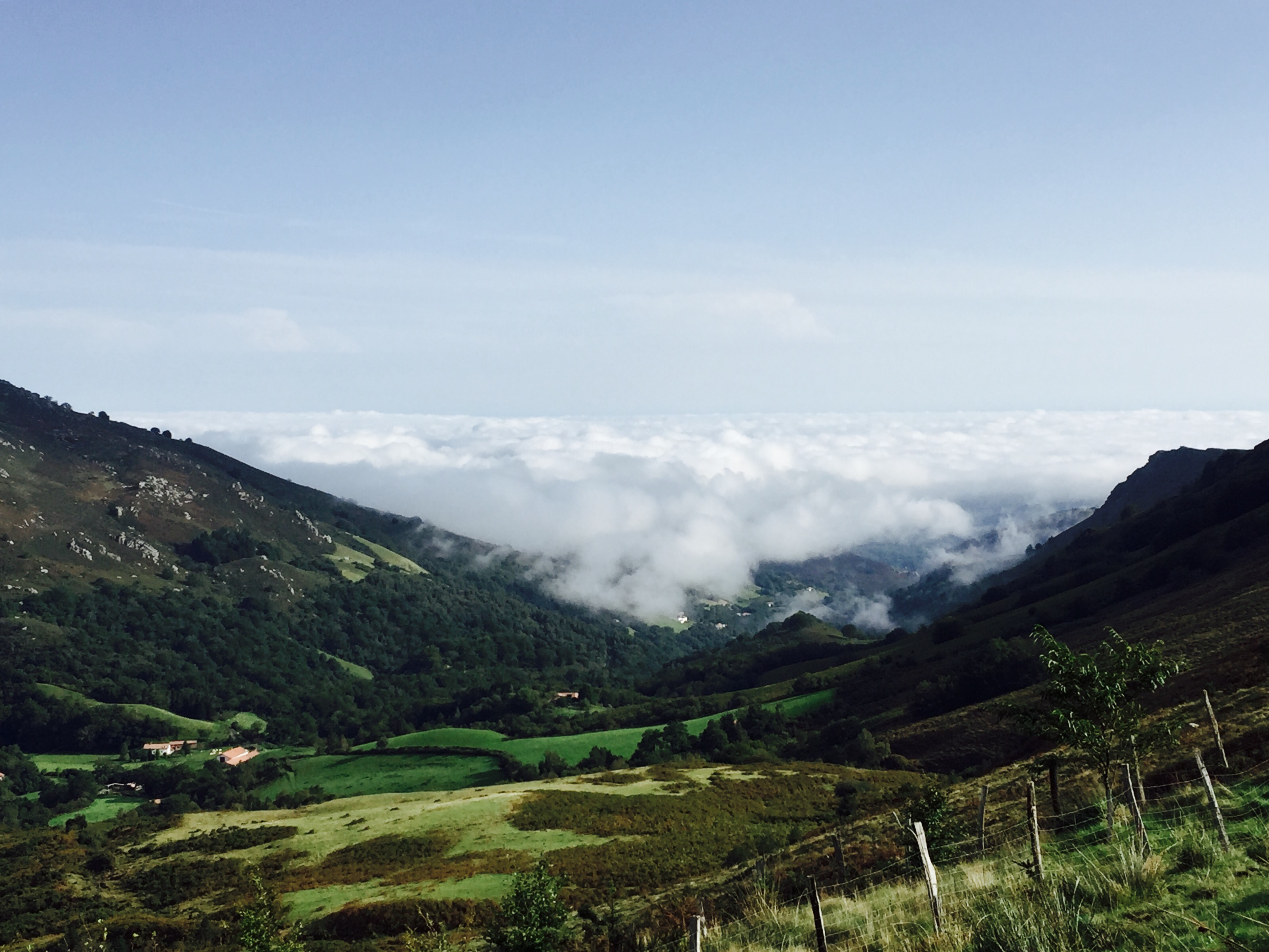 If at any point you get bored in this post just skip to the last paragraph, that’s where things start really heating up! Ohhhh yeah.

Farm life was wonderful. The farmers wife was full of life and whilst eating the huge portions she served us we watched pigs, ducks, chickens and bulls meander through the farm courtyard. Before packing my rucksack and using the farmers duct tape on my boots I walked around and looked down into the valley. It wasn’t there. The whole valley was obscured by a layer of cloud. Ainhoa, Sare and Ohlette, all my previous stops would be having a cloudy day. But because I was living 600m high I was having a lovely sunny morning. This made me feel even more aloof than usual and I hurriedly gathered my things to venture up the next mountain. Ha! I chuckled to myself, what would the valley people be up to now? Who cares! I can’t see them! I was alive I was hiking up my next mountain, each step taking me higher and higher into my new fabulous life. 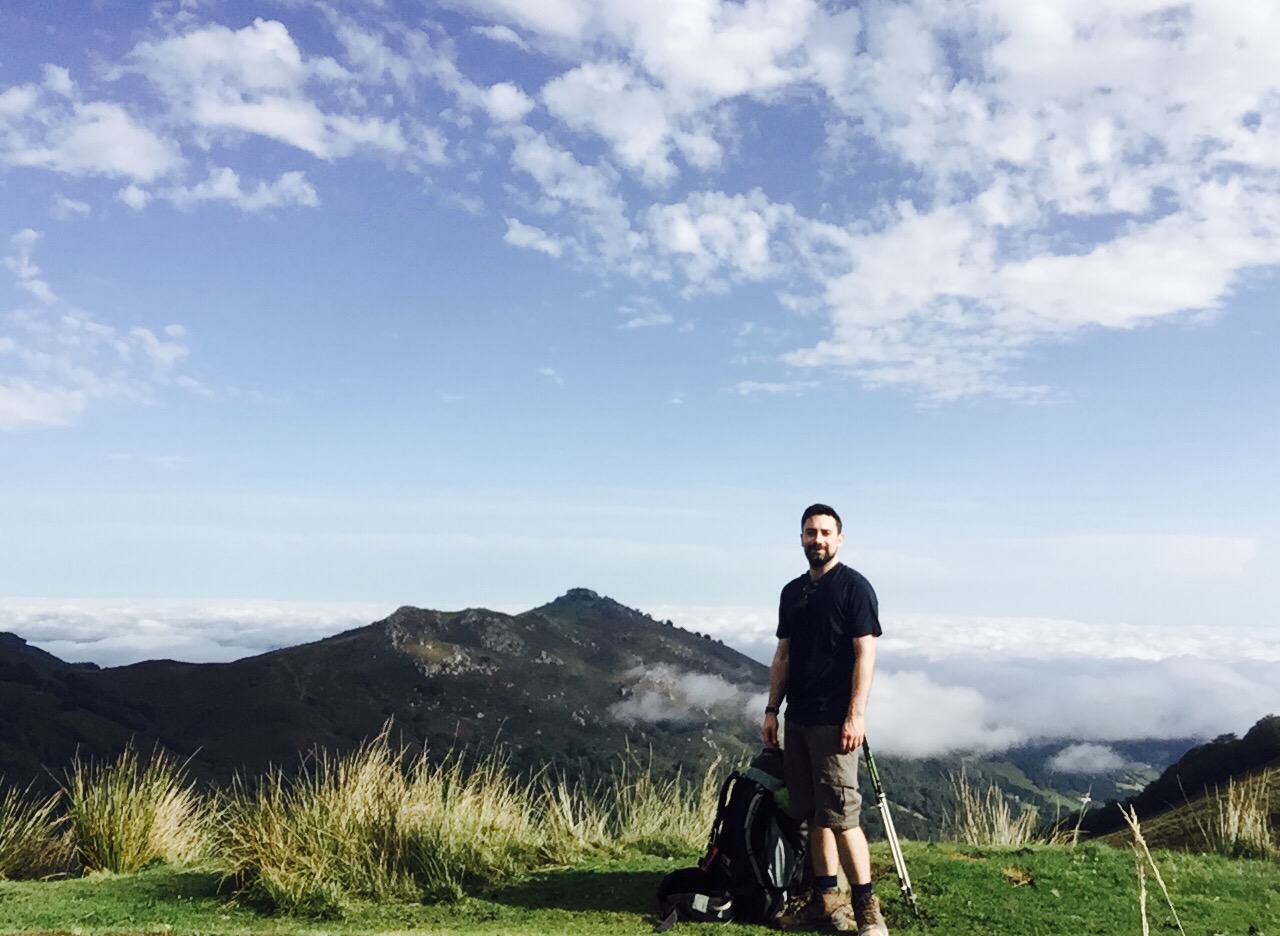 Look at that photo. Look at past Jeff’s smug face, hiding his smug smirk from the little valley people below. They couldn’t see it anyway mate! They’re under the clouds and you’re in this magical sunny land where nothing goes wrong! Past Jeff is a fool, a mountain idiot. This is one of many photos I took as I slowly but happily ascended Férme Esteban’s neighbouring mountain.

The thought did occur to me that this is usually how most of my days start, really well, followed by a fuck up that leads to some hilarious though dangerous escapade. But honestly I did not think today would be like that… Today was just a short six mile jaunt in the mountains. Plus the mountains looked achievable in the morning before any thunder storms arrived. Because thunder storms arrive in the afternoon, dems the rules. Nothing to worry about. I might even camp in Biddarray (the next village) because today will be soooo nice and pleasant with nothing stressful involved at all… you see where I’m going with this right? 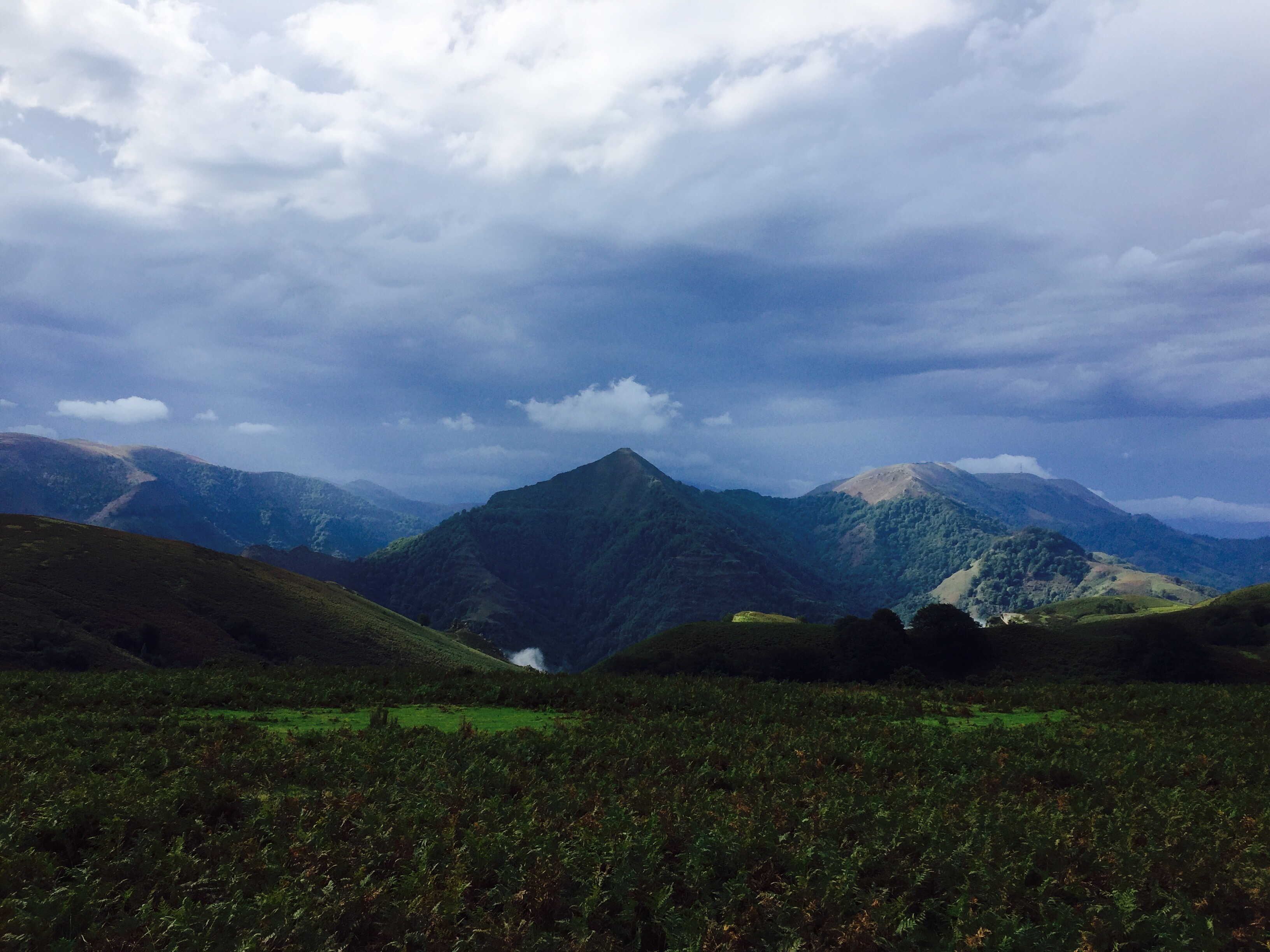 After taking roughly three hundred photos of fluffy clouds in the valleys below I started to realise that some of the clouds were getting higher. Not only that but there was the rumble of thunder and it was getting louder. 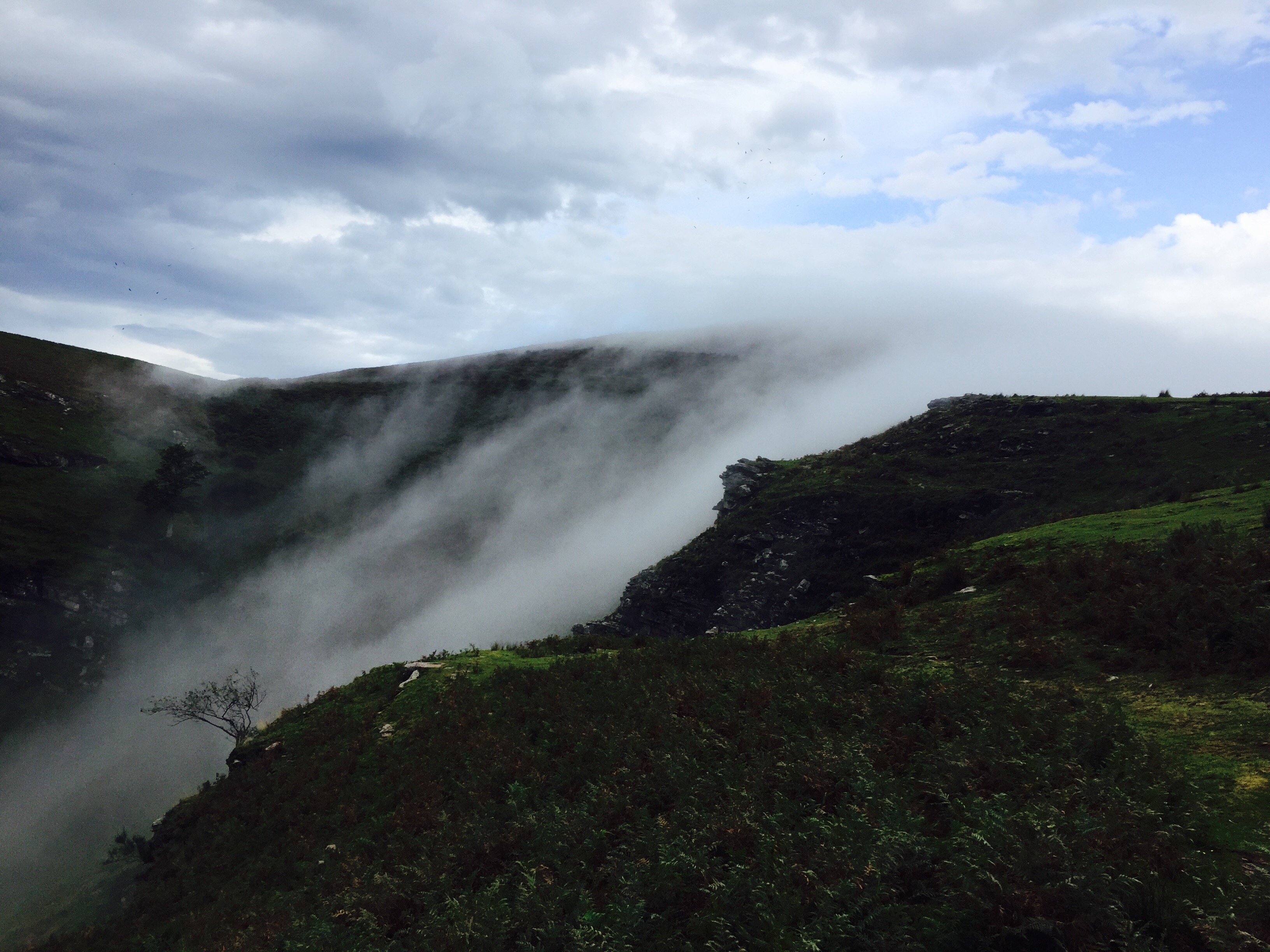 Stood outside a cow shed on a mountain pinnacle, a cloud hit me. Within seconds it went from sunny delight to foggy nightmare. The next GR10 marking I saw pointed over a cliff edge, to the left of it was an almost cliff made of fern, gorse bushes and fallen rocks. I looked at the map and my guidebook which said ‘this bit might be quite difficult with a rucksack’ – cheers mate. Thunder cracked above me. ‘This isn’t possible, I can’t get down that!’ I thought. The clouds below cleared for a few seconds and guess who I saw below? Tiny versions of Göel and Pierre! I shouted down into the slim crevasse until they looked up. They shouted back ‘SLOWLY’! If I had not seen them and if the thunder hadn’t been so loud, I would not have considered doing what I did next.

Down the rubble and fern mountain face I went. One slippery step at a time I fell into cracks and holes hidden by weeds and slippery fern. My progress was slow. The heavy rucksack really came into its own – from lurching me forward with all its weight towards certain death to getting it’s straps trapped in crevices forcing me to slip and slide on my arse until it broke free. This was perfect break your leg or ankle territory. And here I was, in a thunderstorm, lightning occasionally lighting everything around me, with two metal hiking sticks. Oh, and now my right boot decided to fall apart.

I caused a few mini land slides, one resulting in a hiking stick getting stuck under a boulder. I managed to remove it only to realise my foot was resting on a skull. I fell and clambered further over the horse skeleton, the only way I could reassure myself was by talking… to myself. In calmer moments I managed to count the seconds between thunder sound and lightning flash, the lowest was six (the safe zone is thirty).

I lost all sense of time and I’ll cut a long story short. The correct thing to do in a mountain thunder storm is to put your rain coat on, distance yourself from any metal belongings or trees and wait it out in the rain. Not, throw yourself off a mountain.

Covered in bruises and cuts, my legs ache and give way frequently after that shock filled hour(s?). The storm passed and I dried with the mountain, the fallen rain on my path turning into a steamy mist in front of me. I came across G&P sat on a river bank drying out, Göel was also a bit shaken but they had actually managed to find the GR10 path instead of using the cliff I clambered down.

I am staying in a beautiful pub with a lovely bedroom. Sometimes beautiful women walk past in flowing dresses. What a large spectrum of emotions and feelings today has been filled with. I might stay here forever, grow some tomatoes, start a family. That’s as sexy as this post gets. 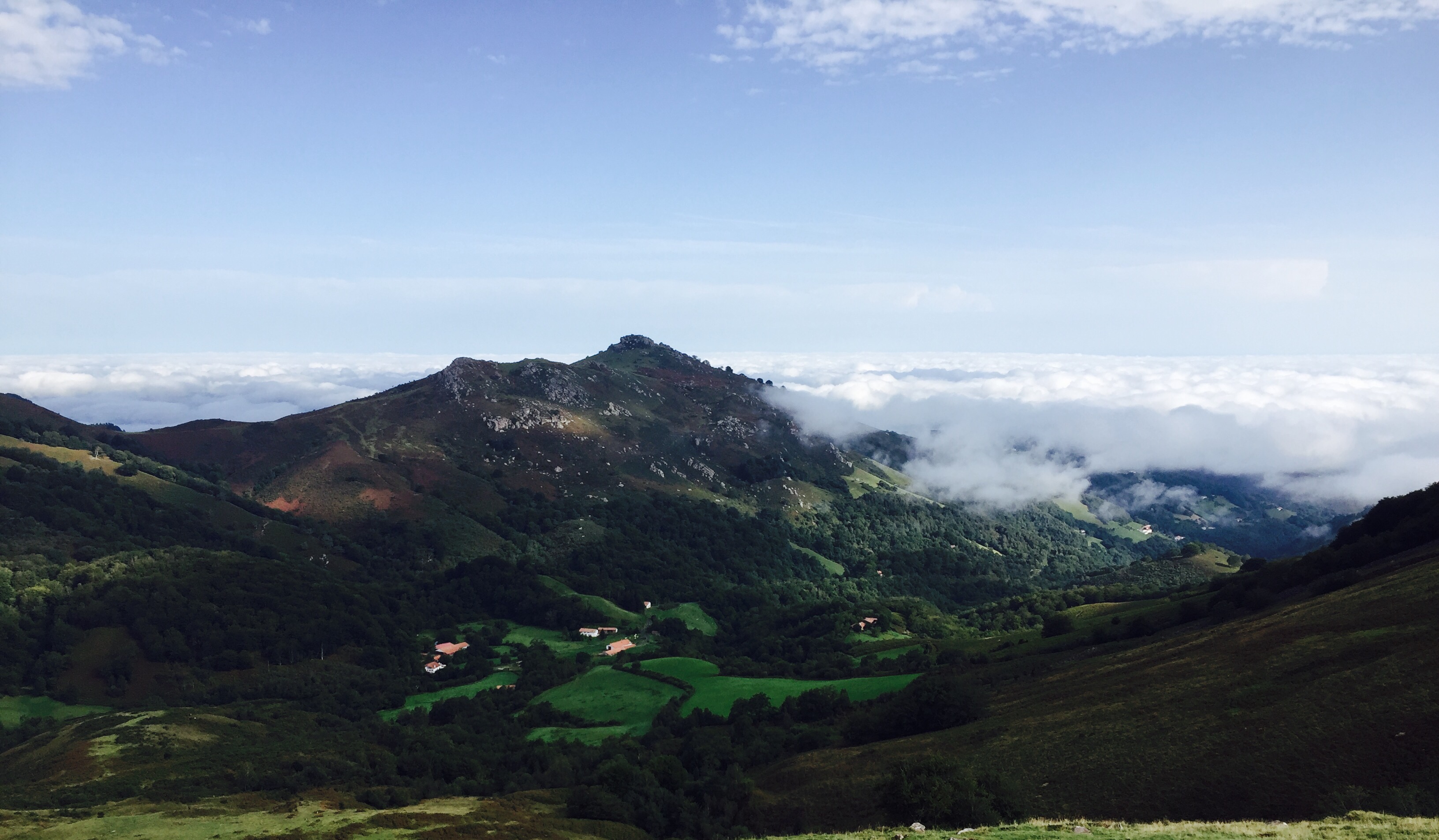 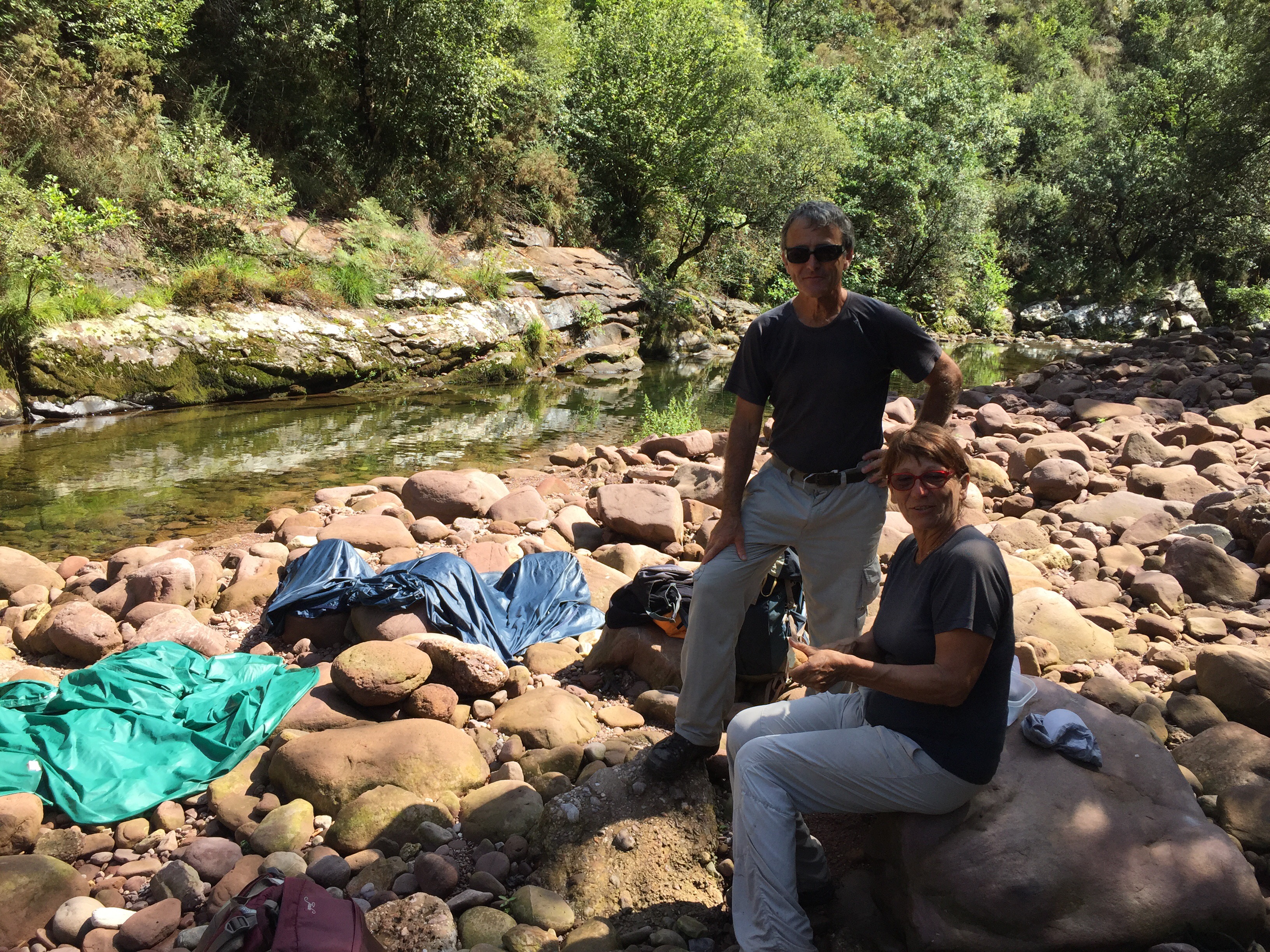