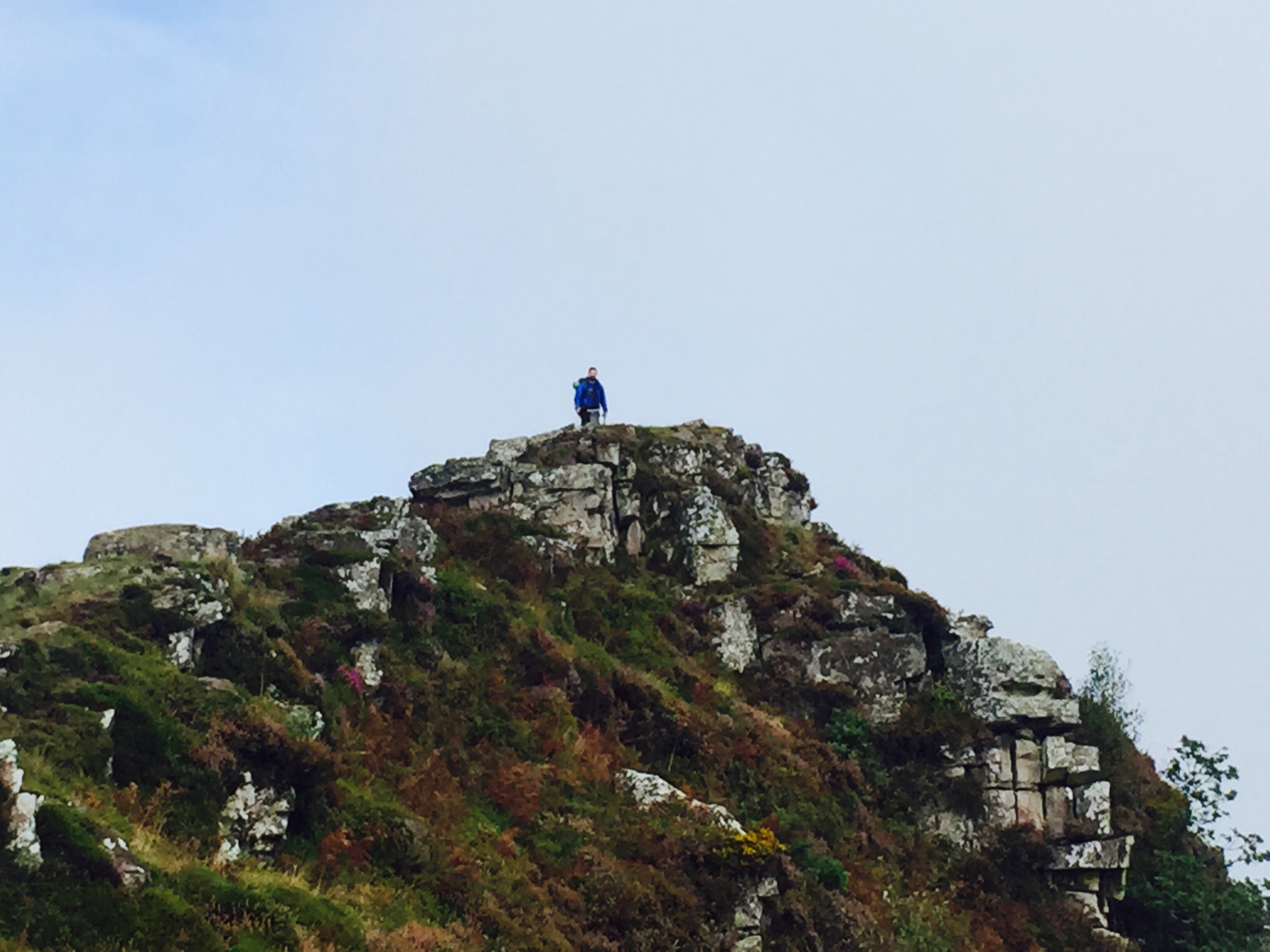 There’s a centuries old saying in the real mountainy parts of the Pyrenees that goes something like this: “if those sheep bells ain’t a ringin then you can shaw bet ya butt there’s a bear in that mist! Ho’damn! There’s a bear fo sho!”**

Awake and packed before the pub staff had moved a croissant, I said fond farewells as my usual petite dejeuner was served with a solitary sock. They’d looked after me wonderfully and even done my washing. I felt like a new man.

Jean-Pierre and Jöelle emailed me back last night, they were now on the other side of I’Parala and the other peaks I had to do today. They warned that it was difficult and dangerous and they’d imagine even more so if the weather’s bad.

So, despite the mistakes of days past such as falling off a mountain, almost poisoning myself and spelling Jöelle’s name wrong in two different ways repeatedly for the past six days – I was ready to go! With my new boots on I trudged up and up, and up, and up… and up. Yesterday I had found it difficult to walk up the pub stairs and lower myself onto the toilet seat every ten minutes. Today was a different a story. Slowly the sounds of village life dissipated, I heard for the last time the loud clanging of Bidarray village church bells, specially designed to summon the cats throughout the valley to parade themselves and feast on the remains of human lunch.

I made new mountain friends, Laurence and Elise a young couple from Bordeaux. The thought of getting their names down on the blog before I knew how to spell them spurred me on. I stormed ahead, each step a step towards boasting and bragging later.

Of course, until the rain storm hit. I’m pretty sure these were the mountains I saw my last thunderstorm form over. So, after a while of walking along a cliff edge roughly 800m high in the pouring rain and cloud, living in fear that I would be the first lightning strike, I abandoned my belongings and sat in the rain looking fixedly in the direction the clouds had come from. After a while the sun started to poke through. It was beautiful, the peaks of other mountains appearing above the clouds. My phone died so there were no pictures. I turned to see Laurence (god I hope that’s his name) standing next to my hiking sticks. It was time to continue. 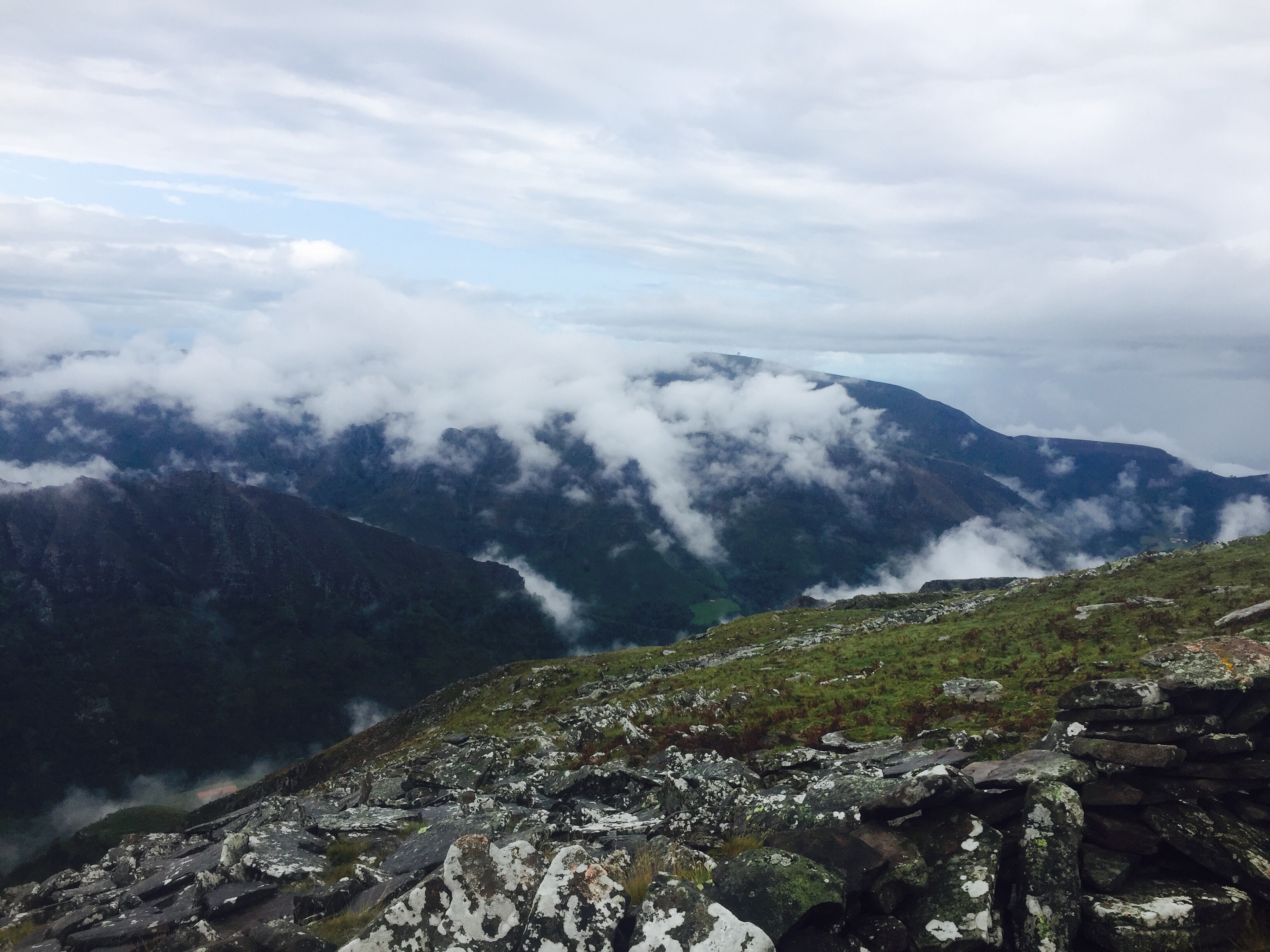 We ascended and descended various peaks all lined up along a cliff edge. Sometimes in cloud, sometimes in sunshine. When I was walking along the cliff edge in cloud I couldn’t see how far there was to fall, when the sun arrived I was mesmerised by the beauty below and also felt a bit sick. It was like walking along the spine of a humongous curled up dragon. Here, more than anywhere else so far, I was aware that the Pyrenees had formed between 80 to 20 million years ago as an island called Spain and Portugal crashed into France.*** 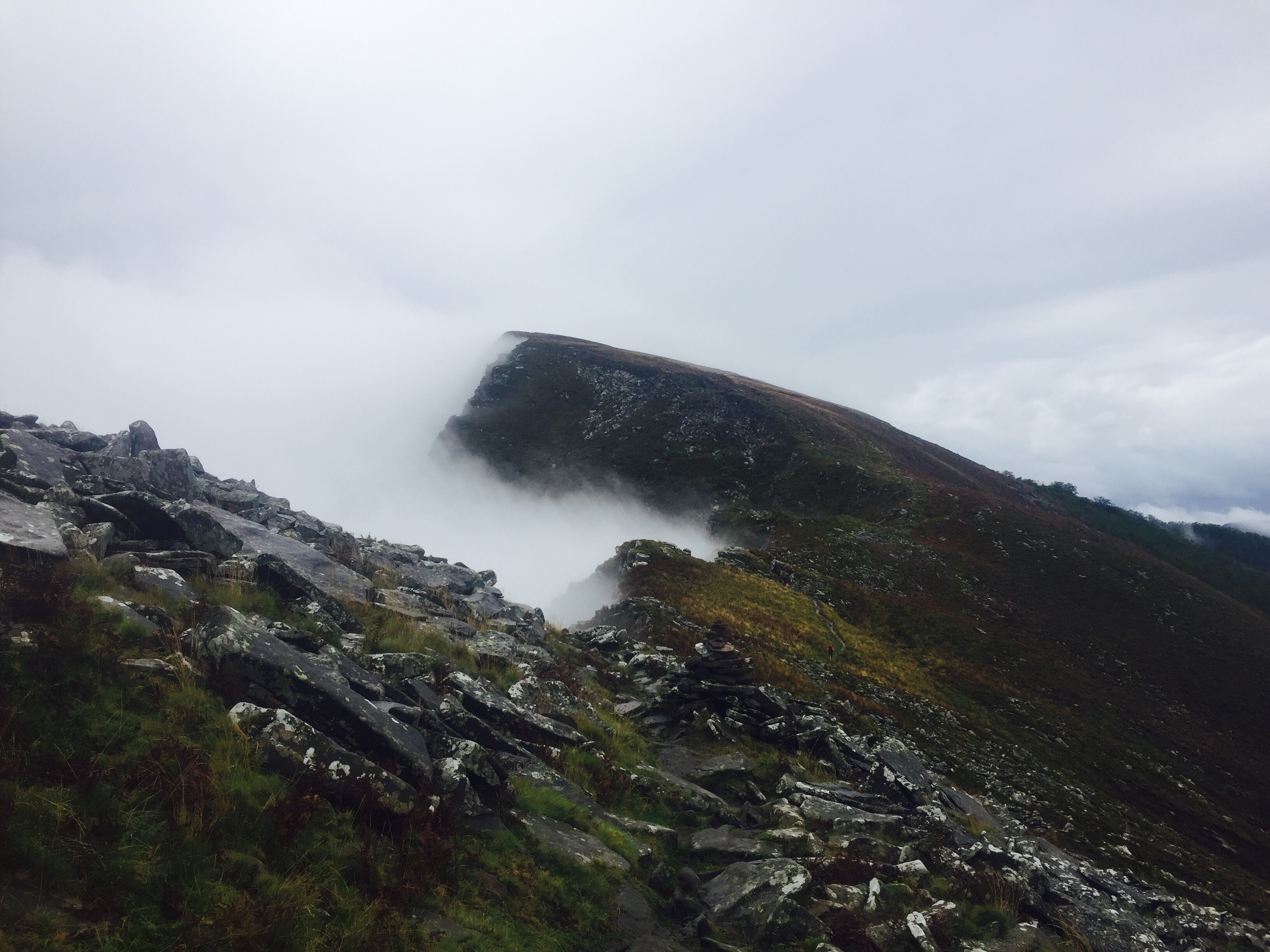 I reached the peak of I’Parla around noon I think. Beyond it, there were a few more peaks and one solitary forest on this largely barren high up land. Trudging through the forest I came across many caves. This gave me the willies. If I was a bear I’d live here. High up, away from humans and close to sheep. Around 300 sheep are killed by bears each year in the Pyrenees. I wonder if the sheep fear us, or bears more?

My queries were soon to be answered. On the other side of the forest I once again found myself in cloud. Trudging on I stopped to adjust my stupidly heavy rucksack. After a few seconds I realised I was surrounded by sheep. Some were shadows in the cloud, many were facing me, scraggy, with bells dangling below their necks. I hadn’t heard any bells so it came as quite a shock to be surround by thirty sheep or so. One sheep’s face stood out more than the rest, the leader of this renegade pack, staring fixedly at me. She chewed. Her bell clanged slightly. She raised a hoof and stopped it before it clanged again, all the while staring at me in the eyes. I thought sheep were friendly creatures but the eyes of this high priestess of woolly mountain bandits said other wise. No words were said but the message was clear… your kind have abandoned us up here, up here of all places! The place where lightning is made! And the place of bears. And to boot you have tied fucking bells around our necks to help the bears find us. It’s like a sick unfair version of hunger games! No. You, are not welcome here.****

The rest of the walk was delightful but strenuous, it has been the most spectacularly gorgeous scenery I have seen yet. I ascended 1300m today and walked 12 miles. My tent is pitched behind a distillery. I am in a biker bar watching Basque ready steady cook. 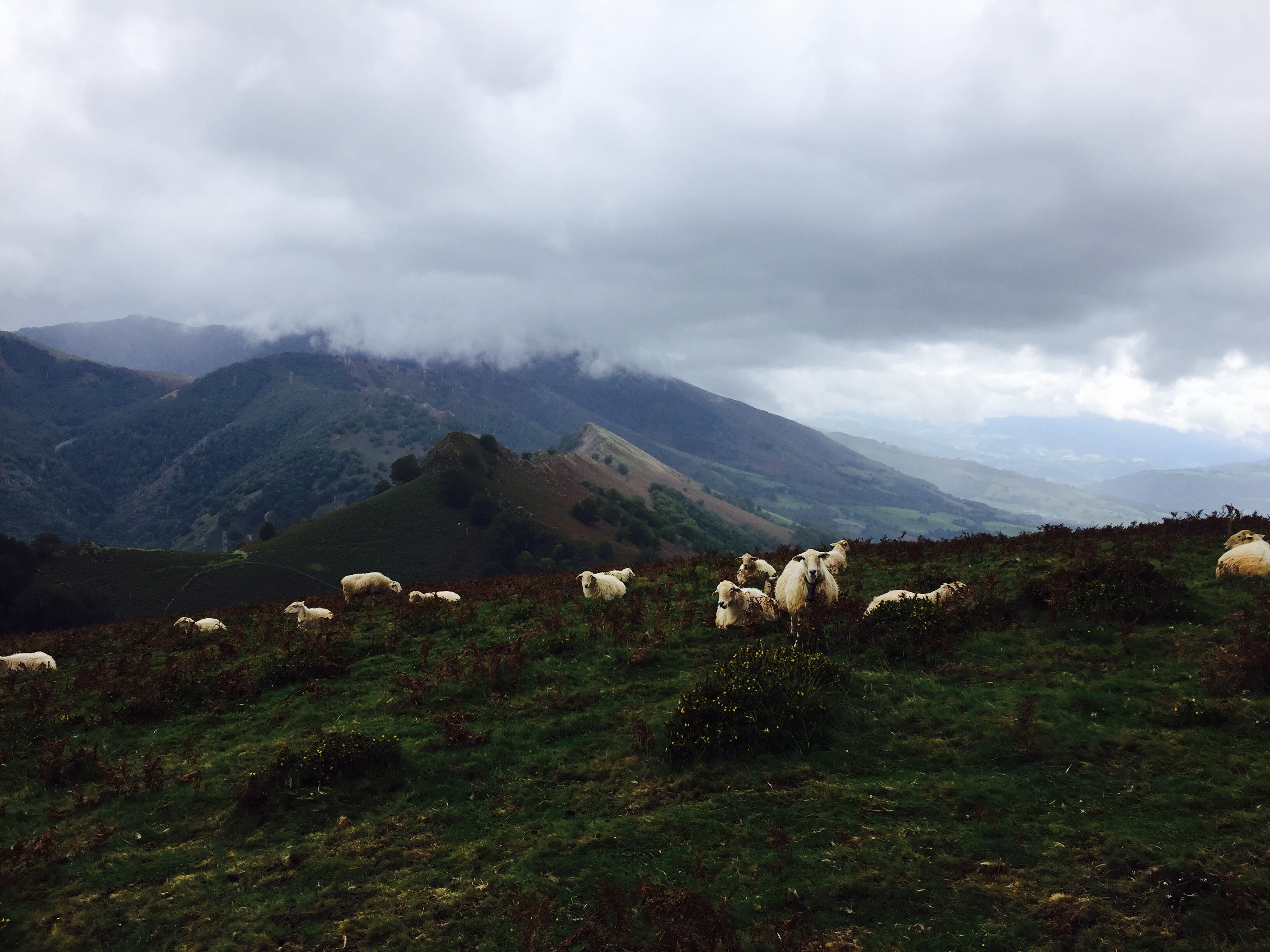 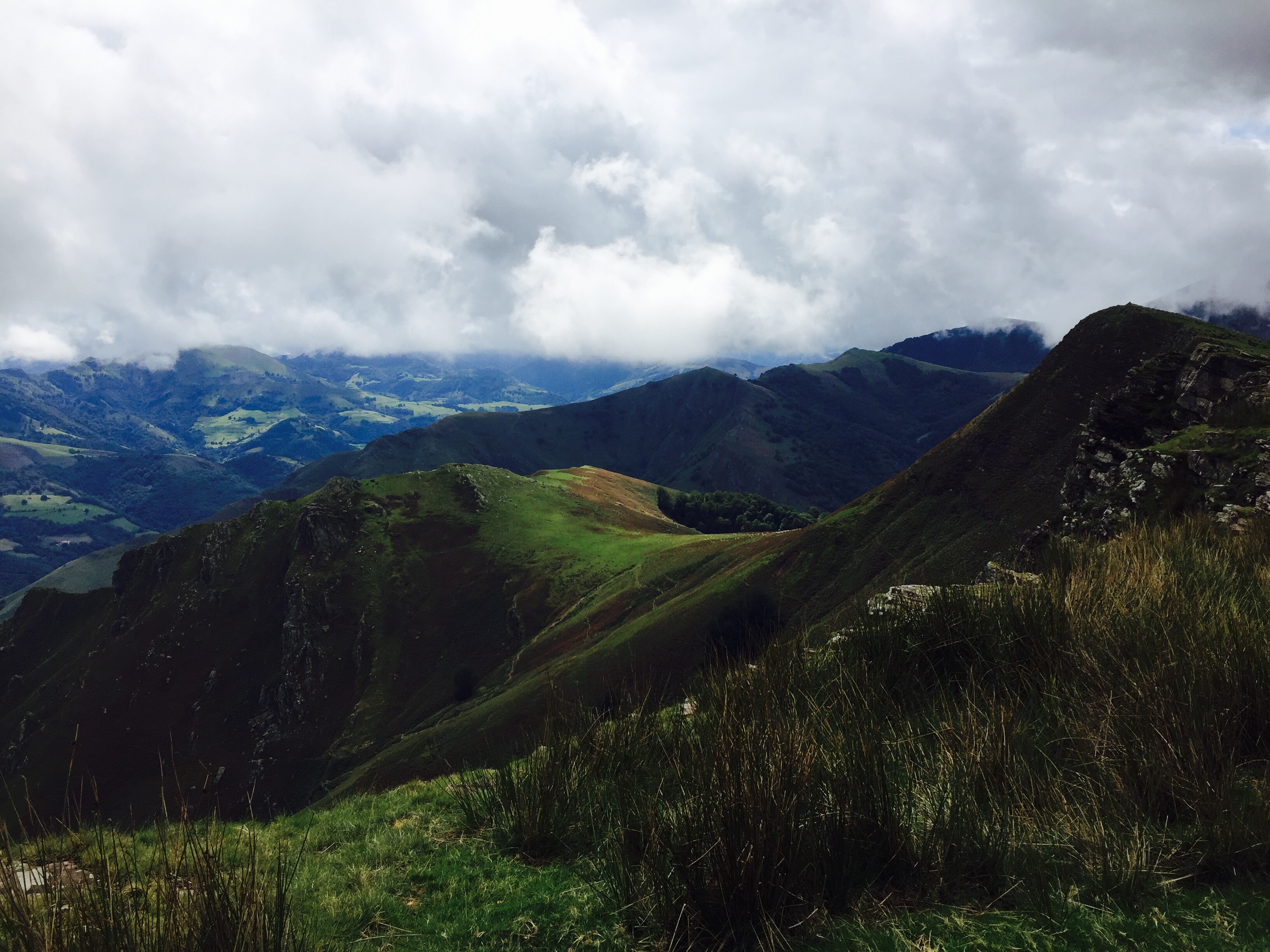 *There are no bears in this post, only bear puns and the ghostly thoughts of bears.

**This is entirely made up.

***Yes. This is from Wikipedia.